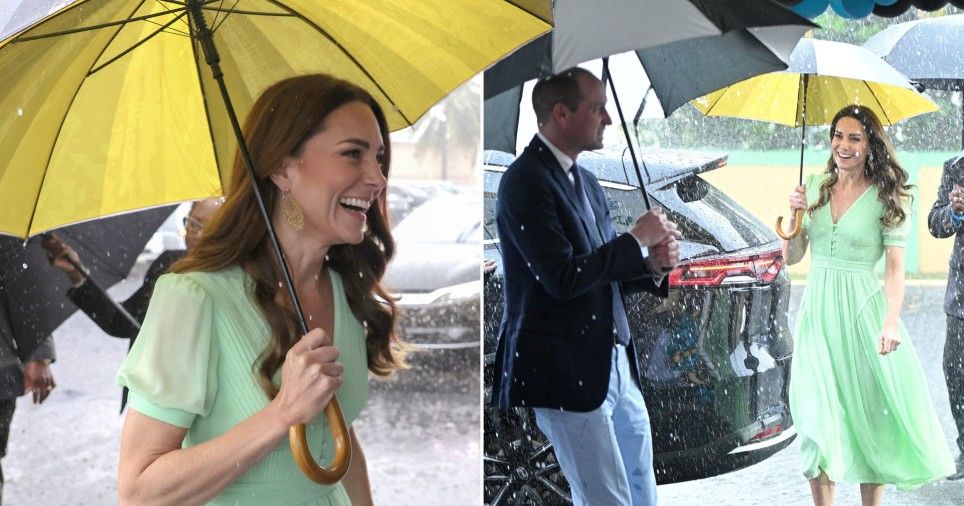 Prince William and Kate Middleton weren’t going to let a bit of rainy weather ruin the final leg of their Caribbean tour.

The Duke and Duchess of Cambridge were met with a torrential downpour as they visited a school in the Bahamas this morning.

Wearing a pastel green dress by Self Portrait and jewellery by Bahamian designer Nadia Irena, Kate quipped: ‘Oh my gosh. The weather, sorry, we’ve brought England’s rain with us.’

Even though it’s actually pretty sunny back in the UK today and torrential rain is common in the Caribbean, William also joked: ‘We’ve brought the weather, haven’t we?’

The pair are nearing the end of their eight-day tour of the Caribbean, where they have faced protests over Britain’s troubling colonial legacy.

Their visits to Belize, Jamaica and the Bahamas are to celebrate the Queen’s Platinum Jubilee. But the tour is also being seen as an attempt to dissuade Commonwealth countries from following in the footsteps of Barbados by becoming republics. 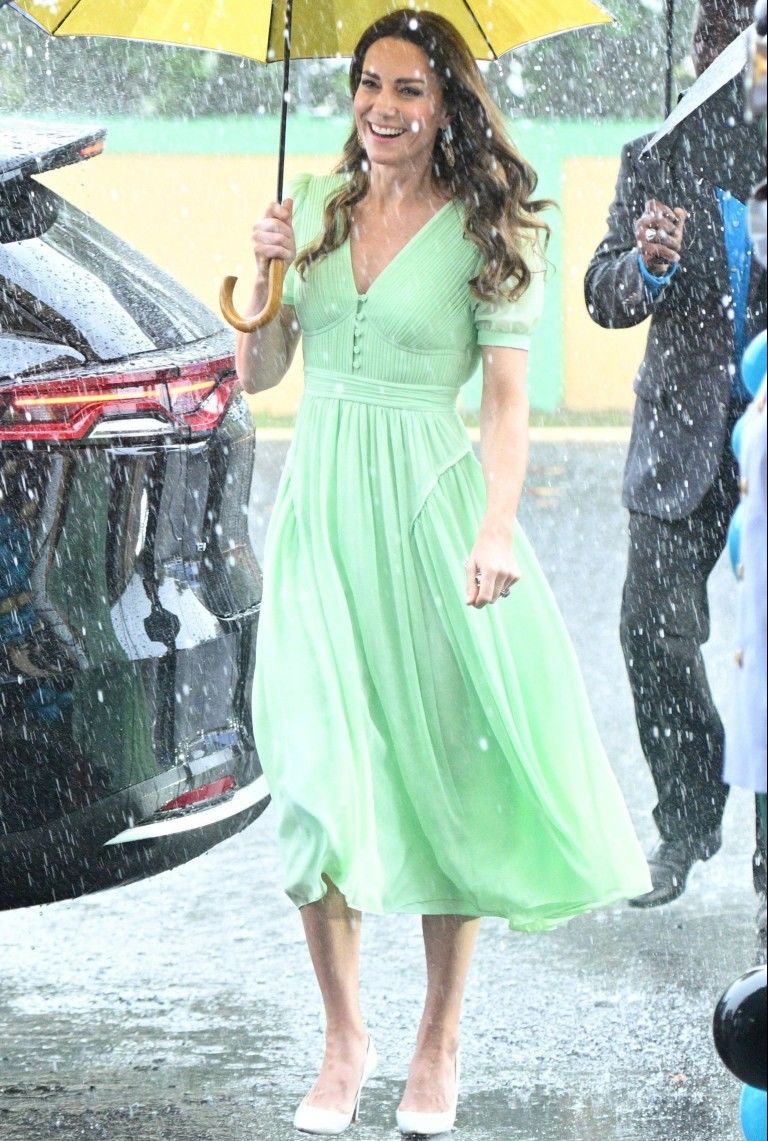 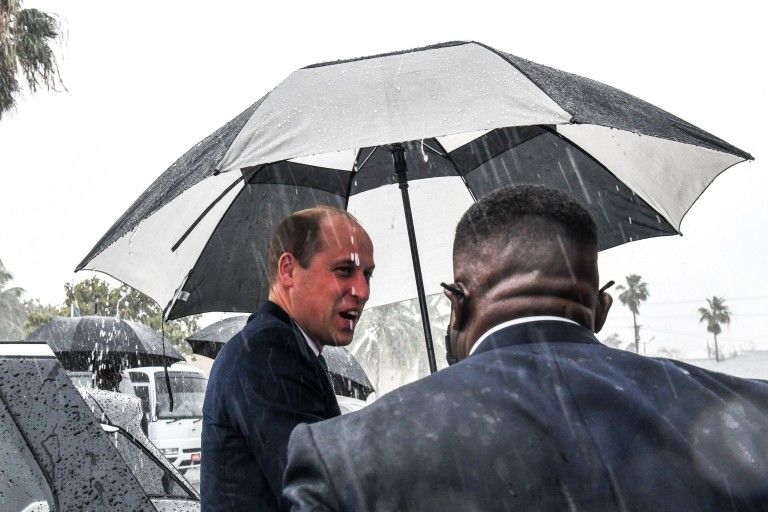 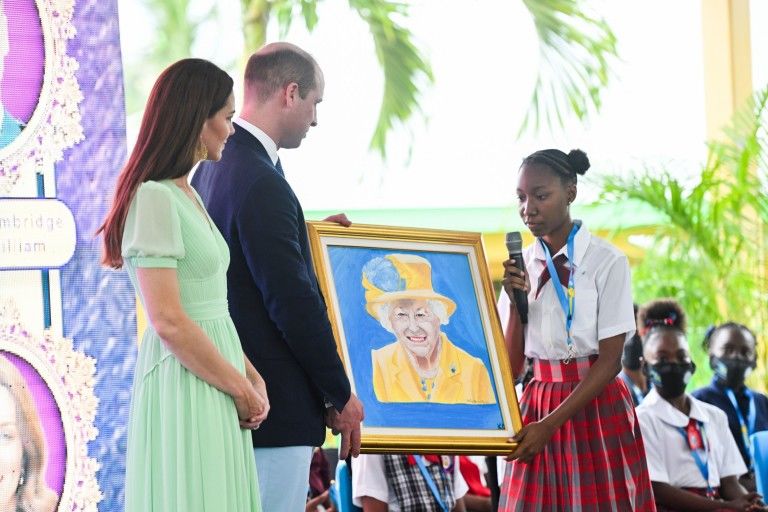 Jamaica has reportedly already started the process, as a number of politicians call for an apology from the Royal Family and reparations for the slave trade.

Despite the controversy hanging over their tour, William and Kate were all smiles as they arrived at Sybil Strachan Primary School, in the Bahamian capital of Nassau.

They dropped in on a class to meet pupils and staff and also joined morning assembly. Schools in the country were closed for nearly two years from March 2020 until January due to the Covid pandemic.

In a speech during the assembly, Kate, a champion of early years education, told pupils: ‘I hope you didn’t get too wet coming here and apologies for bringing this British weather with us. Thank you so much for such a warm welcome.’ 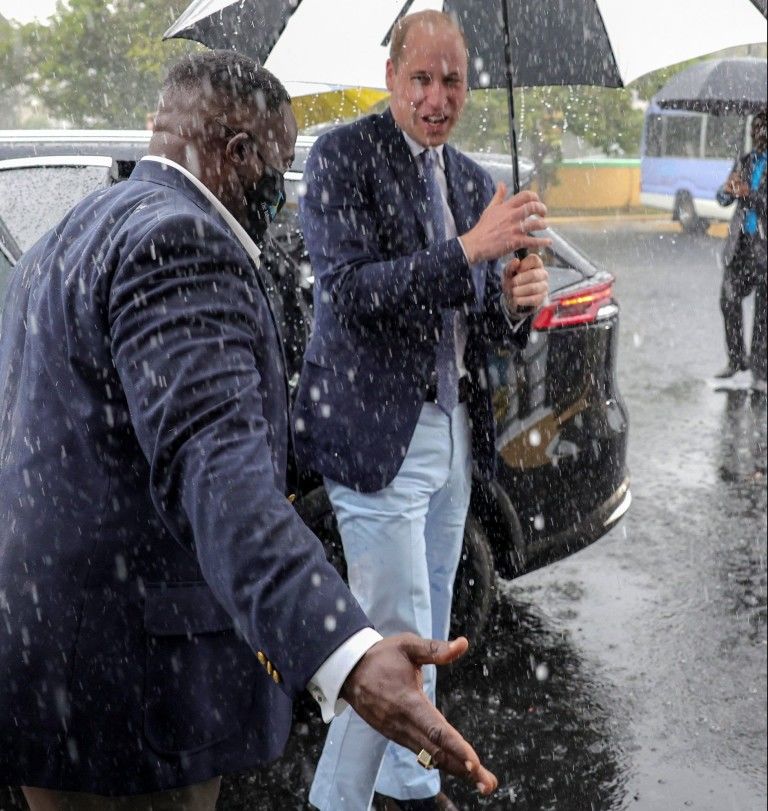 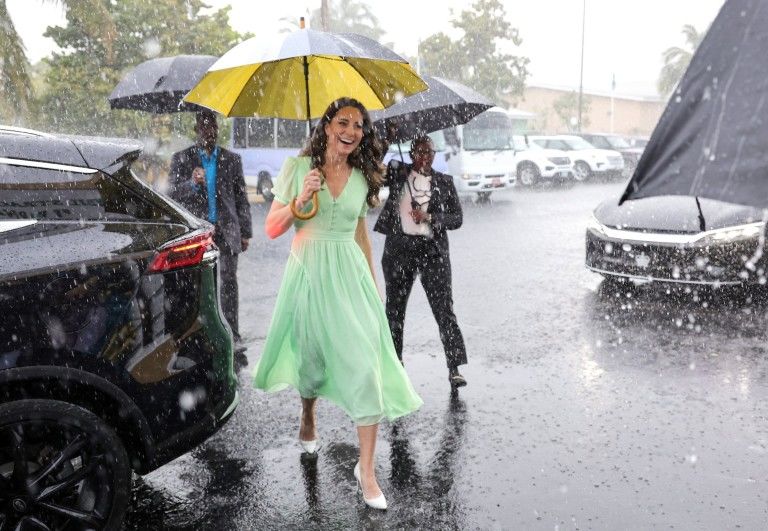 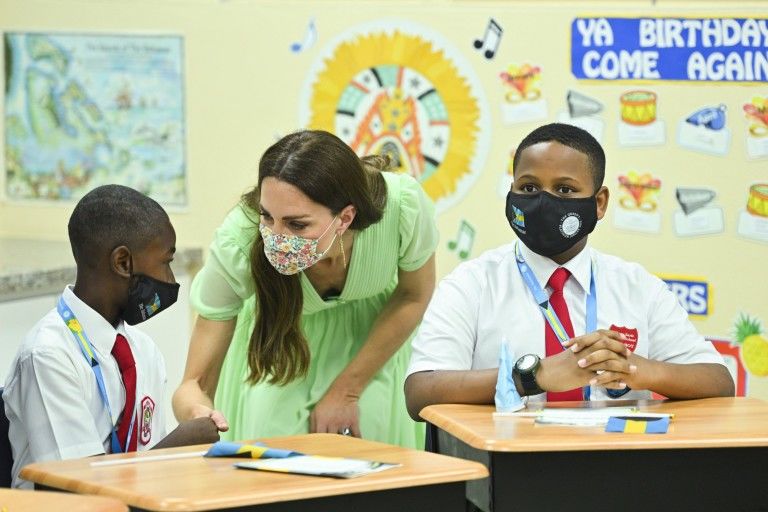 The duchess said the couple’s three children George, Charlotte and Louis ‘all love being by the sea. She added: ‘So I hope they will be able to experience your clear waters and beautiful beaches before too long.’

Kate told pupils ‘the last few years have not been easy for many of you’, adding: ‘One of the hardest things I think we’ve all found about the pandemic was being separated from the people we love.

Today William and Kate are also set to join a regatta in the islands waters and are expected to race against each other. 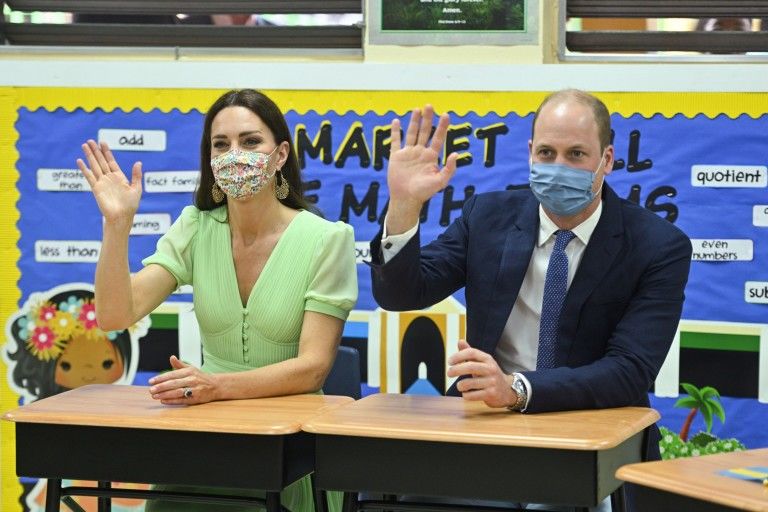 The couple will also spend time with key workers and frontline staff at an informal gathering in the Garden of Remembrance in the capital.

In the evening they will attend a dinner hosted by the Governor General Sir Cornelius Smith featuring community leaders and local heroes and the duke will give a speech.

During their visit, the Cambridges are also set to participate in a cultural event featuring typical Bahamian food and music.

A protest is planned today by Rastafarian groups to demand reparation payments by Britain and an apology for slavery.

The Bahamas National Reparations Committee, an independent panel created by the government to study the issue, made similar calls in a letter. 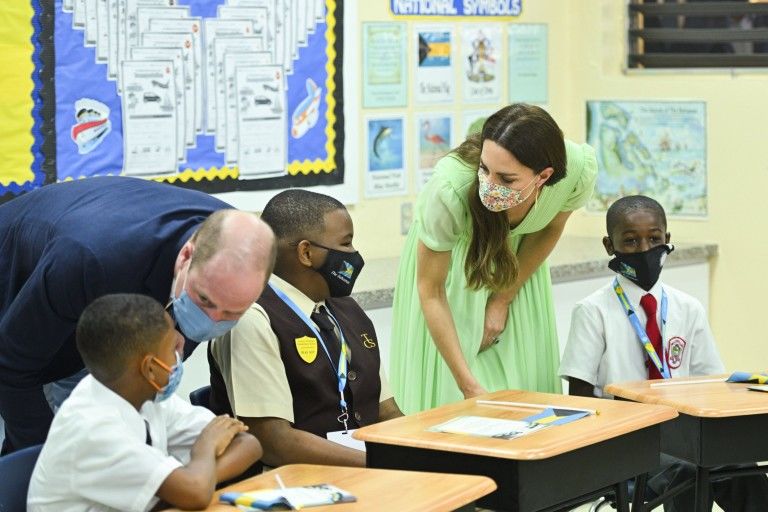 A letter published on Tuesday read: ‘They and their family of Royals and their Government must acknowledge that their diverse economy was built on the backs of our ancestors. They must pay.’

The organisation claimed the monarchy ‘looted and pillaged our land and our people for centuries, leaving us struggling with under development, left to pick up the pieces’.

A separate demonstration will ask William and Kate to help bring attention to problems facing Bahamian women, including a legal provision that bars the prosecution of a person for raping their spouse, which is sometimes described as ‘marital rape’.

Yesterday Philip Davis, prime minister of the Bahamas, welcomed the Cambridges to his nation. He told them: ‘And our best wishes are sent to the Queen, and congratulations on her Platinum Jubilee. I do not think we will see the same again.’ 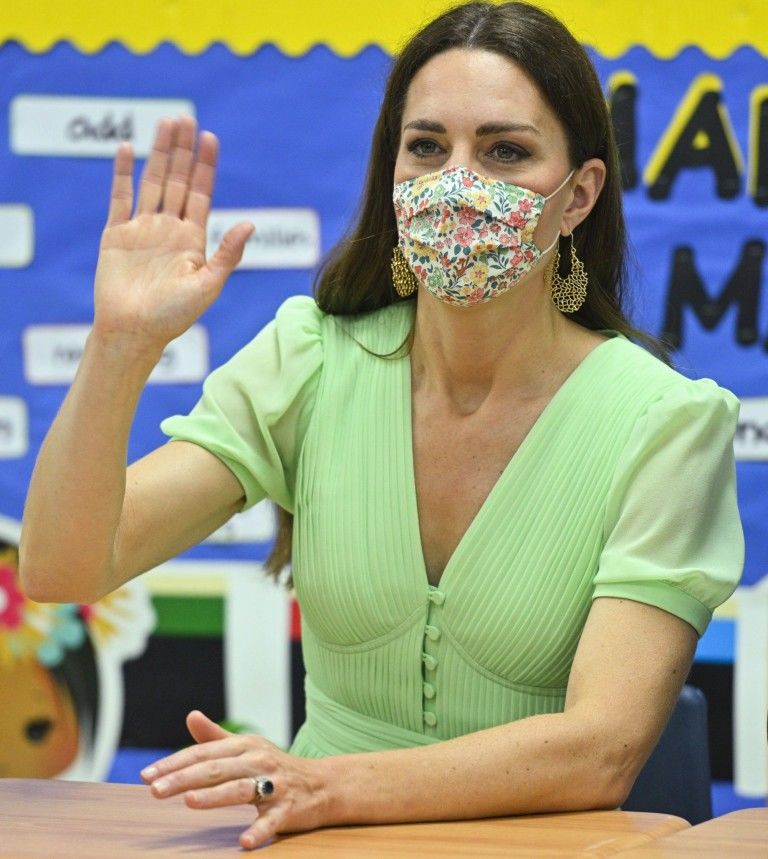 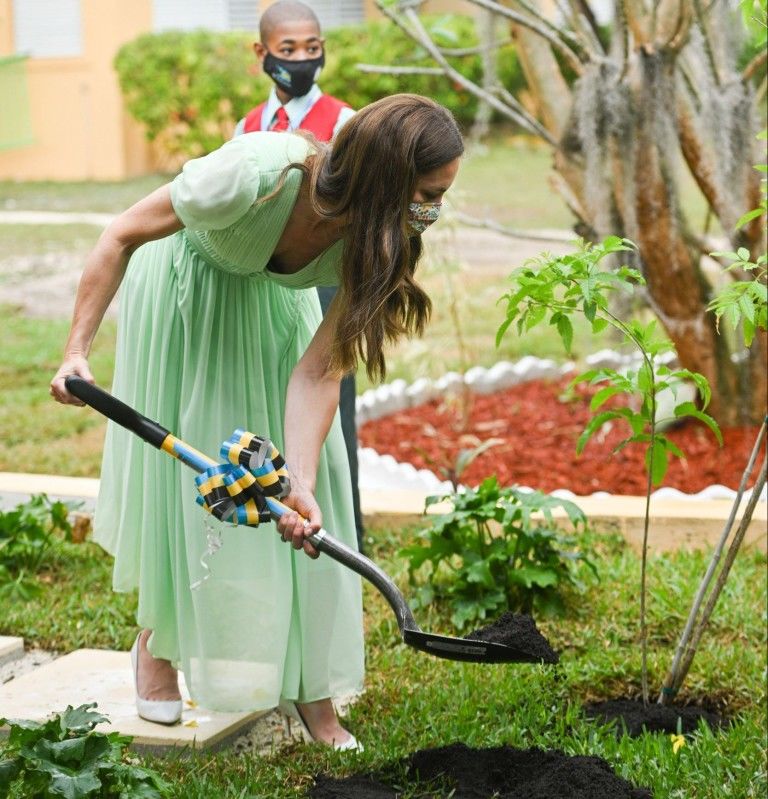 The duchess plants a tree at the primary school 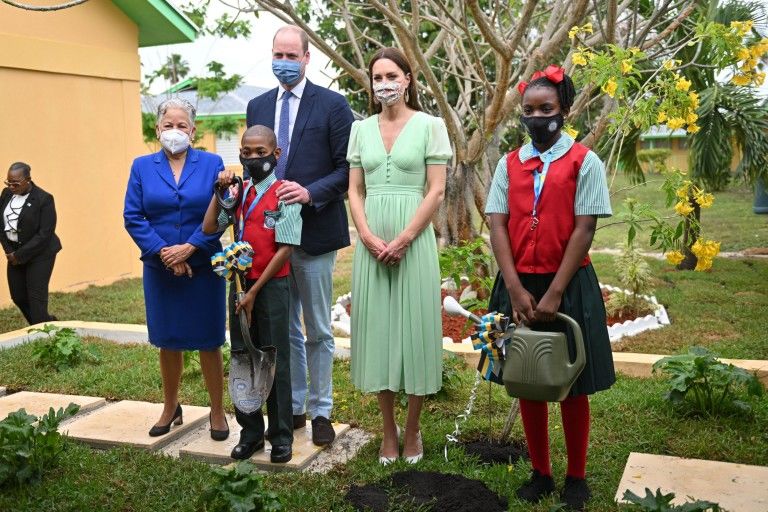 The Bahamas, an archipelago of 700 islands and islets was the first stop in the western hemisphere for the famous explorer Christopher Columbus in 1492.

Centuries later the now prosperous islands became independent from Britain in 1973, but the nation is still a member of the Commonwealth.

But like many parts of the globe, resentment against colonialism and its legacy has been growing amid the backdrop of the Black Lives Matter movement.

In Belize, a visit to a cacao farm was hastily re-arranged following an ‘anti-colonialism’ protest by indigenous people over land owned by a charity of which William is a patron.

William expressed his ‘profound sorrow’ at the forced transportation of millions of people from Africa to the Caribbean and North America – a trade which British monarchs either supported or profited from during the 17th and 18th centuries.

The future king did not say sorry, just as his father Charles had not apologised during his trip to witness Barbados become a republic in November.