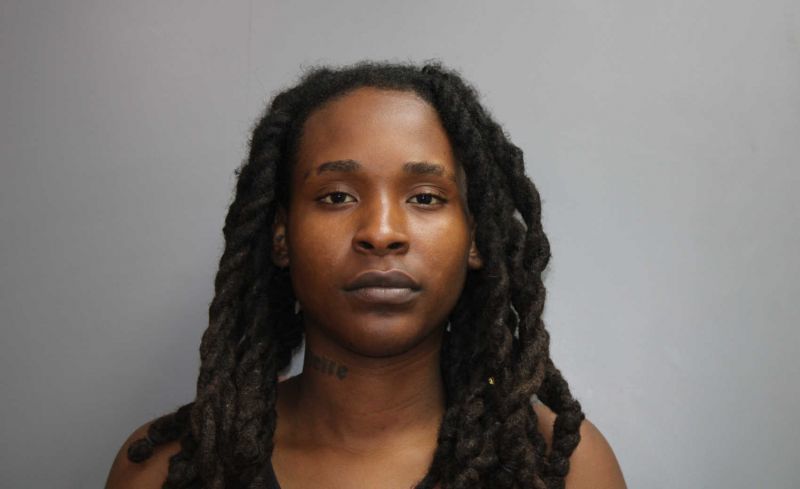 Michelle A. Andre, who was recently in court on a domestic violence matter, re-appeared before the V.I. Superior Court Friday after she was arrested for allegedly slapping a police officer while officers were providing assistance at the scene of a vehicular accident.
Andre was arrested on charges of aggravated assault and battery, and interfering with an officer while discharging her duty.

The arrest comes after a police officer requested additional police assistance at the scene of an automobile accident on the Queen Mary Highway near the St. Croix Educational Complex High School. According to court documents, individuals were allegedly getting hostile on the scene of the accident.

According to the probable cause fact sheet, on arrival to the scene, police observed a small group of individuals cursing profanity at someone. Police approached the officer who had requested assistance, and she pointed to the same group of individuals and said that she was also trying to approach one of the drivers involved in the accident.

Firefighters who were at the scene approached police and asked that the group of disruptive individuals be instructed to move away from the accident scene due to a live wire which was hanging from a power pole that was struck by one of the vehicles, making the scene unsafe.

Police immediately walked over to the group and gave the command to move from the area. The command was given three times, however, no one responded. Minutes later, Michelle Andre arrived at the scene and joined with the group of individuals, cursing profanity and commenting, “Wait until we see you on the road,” making reference to one of the drivers involved in the accident. The group, along with Andre, were again instructed to move away from the area but they kept cursing at the officers, according to the probable cause fact sheet. Andre then used her left hand to slap one of the officers on her hand and face, while shouting, “don’t touch her!”

Before the officer could react to Andre, Andre was grabbed by other officers and taken down to the ground and placed under arrest.

In court on Friday, a judge ruled that Andre be released upon posting $100 cash with the remainder of the $1,000 bail amount to be posted as an unsecured bond. She is to be placed on 24-hour house arrest without the use of an electronic monitor. She is only allowed to leave her residence for travel to and from work, to the hospital, or to attend court appearances.

Andre is to have no unlawful contact with the victim or any witnesses in this matter.