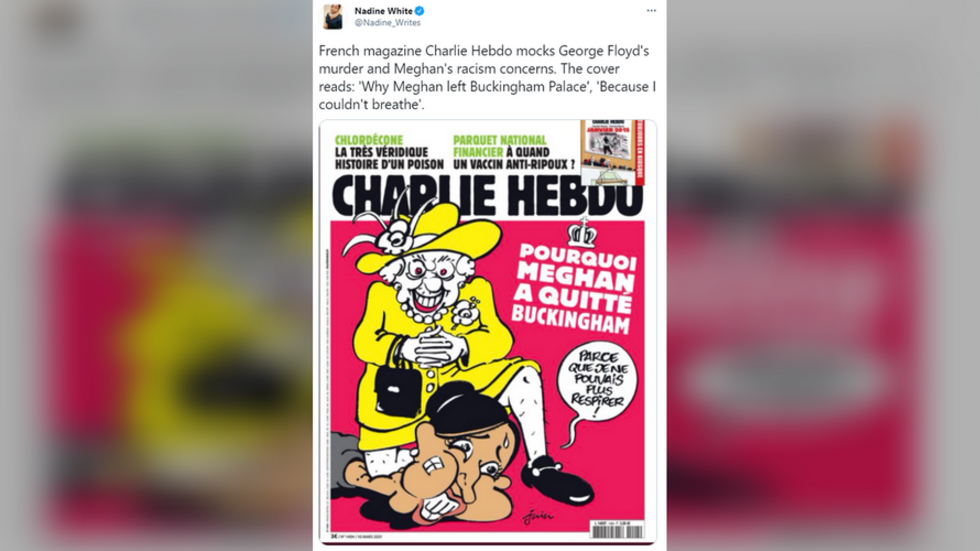 Notorious French satirical magazine Charlie Hebdo has published a new cover making fun of Queen Elizabeth, Meghan Markle, and George Floyd at once. Amid the outrage, some liberals demanded blood.

"Why Meghan Markle left Buckingham Palace,” read the cover of this week’s Charlie Hebdo, followed by the punchline, uttered by Markle: “Because I couldn’t breathe.” The illustration depicts Markle pinned under the hairy knee of a smiling Queen Elizabeth II, with the pose and punchline a reference to George Floyd, a black man who died under the knee of police officer Derek Chauvin in Minneapolis last summer. “I can’t breathe” were Floyd’s last words.

The cover sparked outrage. “This is wrong on every level,” Halima Begum, director of a UK anti-racism think-tank, tweeted, adding that “this doesn’t push boundaries, make anyone laugh or challenge #racism. It demeans the issues & causes offence, across the board.”

The cartoon had its defenders, too. Some argued that Charlie Hebdo’s purpose in the first place is to offend, and others claimed that the cartoon’s actual target was the alleged racism of the royal family, which Prince Harry and Markle claimed in a recent interview to have been on the receiving end of.

Charlie Hebdo, to put it extremely mildly, is no stranger to controversy. 12 people were killed in 2015 when Islamist gunmen attacked the magazine’s Paris offices, in revenge for its publication of satirical images of the Prophet Mohammed. A group affiliated with Al-Qaeda took responsibility for the attack.

The 2015 shooting led to worldwide protests and shows of solidarity for Charlie Hebdo and its right to offend, organized under the slogan “Je Suis Charlie.” This time around, some outraged commenters proved themselves almost as fanatical as the terrorists, who one argued “should have finished the job.”

The cartoonists at Charlie Hebdo likely welcome the outrage. A week after their offices were attacked and their colleagues murdered, they published another image of Mohammed, this time holding a sign reading “Je Suis Charlie,” along with the text “Tout Est Pardon” (All is Forgiven). Since then, the magazine has drawn backlash for making fun of Turkish President Recep Tayyip Erdogan, drowned Syrian migrants, Italian earthquake victims, and Russian air crash victims, among others.